You are here: Home / 2011 / UFO’s or Unexplainable Flourishing Outlets in Thailand

By I-nomad on September 22, 2011 | Leave a response
Compared to Phuket city and Patong, Ao Nang in Krabi is quite provincial. According to GeoNames it has a population of 8000, but wether this figure is correct or not it still managed to maintain a bit of a village atmosphere.
Ao Nang sometimes reminds me of a miniature Patong; there’s a multitude of tourists of different nationalities.
With the Swedish coming en mass to Krabi in the 80′s, Scandinavian probably represent the largest group of expats here. The town has more than enough accomodations of all levels, international restaurants and even one McDonald, a Burger King, a Subway, no not undergound, a Starbucks, Swensen and Häagen Dazs ice cream parlour and nightlife activities at various locations.
Besides a bus load of people touring through Thailand who stopped for a treat of bitter balls, in the two weeks we have been staying here, I haven’t been able to spot a single Dutch tourist. Fine with me, I’m not dying to meet one. Suprisingly, Dutch or Thai-Dutch businesses seems to be disproportionally represented here.
As many of us will know, Dutch food is like English food, nothing to write to home about. Am I making enemies now?
Still, Ao Nang boasts two Thai-Dutch restaurants, one Dutch snackbar, one hotel, two (partly) Dutch owned foreign restaurants with some Dutch food on the menu as well and one Dutch owned bar. Together this is actually more than can be found on the whole of Phuket island.
In comparison there seem to be just one Thai-German restaurant, but in contrast we met a fair share of Germans.

To me Dutch restaurants are like Nepalese tailors here; plenty of shops, hardly any demand.
I wonder how many P’s of marketing were considered before getting into business? How on earth do they survive or is it just a hobby to keep busy?
Well, I guess at least the guy below would rather sleep at home. 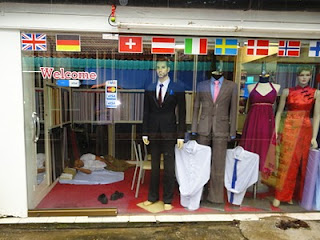