You are here: Home / 2011 / Thai police advertise for shemale-cabaret 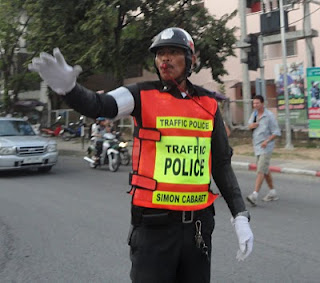 Seen today in Patong, Phuket; a traffic-police officer advertises for Simon cabaret, a famous transsexual show and tourist attraction around here. On one hand it shows how tolerant Thailand is towards the phet ti saam (third gender). On the other hand ladyboys, depending on how feminine they are, are being dismissed from the army for having a mental disorder, reducing the chance for senior positions and getting bank loans, although talks are going on now to change this disrespectful stigma.
(Update 2-4-2011: The stigma has been lifted; one is now dismissed for having minor defects like a problem with the right small toe. No kidding!)

Thailand has the highest percentage of transgenders and transvesties in the world, second being Iran.
In Iran’s Moslim world a full operation is the only way of gay expression apart from being hanged. 50% of the costs of a sex-change is being paid by the government. In 1963, Ayatollah Khomeini wrote a book in which he stated that there is no religious restriction on corrective surgery. Later when he became leader he endorsed this policy. For the full article see: Transsexuality_in_Iran.