You are here: Home / 2011 / Expat in Nakhon Rachasima produces snus 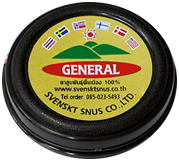 Necessity is the mother of all invention.
Or so Monk an expat Swede, must have thought when he started Svenskt Snus Co., Ltd in 2008.
Snus Co., Ltd is located in Pak Chong, Nakhon Rachasima, 175km North East from Bangkok

Snus is a moist powder tobacco product which is consumed by placing it under the upper lip for extended periods of time.
Whereas cigarettes became popular less than 100 years ago, snus was discovered in the 16th century by Frenchman Jean Nicot, a man who became immortal when he discovered nicotin.
Use of snus is a very popular (and addictive) pastime for Swedish and Norwegian men. To a lesser extend it is also being used in Finland and Denmark.
Snus is banned in the rest of Europe due to improper research results, stating that it could cause cancer.
When Sweden and Norway joined the European Community exemptions for legal production and use in these countries were made.
Research has shown that thanks to snus Sweden and Norway have considerable less male smokers, whereas smoking amongst the female population seems to equal European averages.
Yes, snus is a real male Viking thing.
Europe is now considering to lift bans, since by any means snus is a healthier alternative than smoking.
Although some people claim it is more addictive than cigarettes, in the rest of the world snus is fully legal and healthier tabacco alternative for adults.

As advertised Svenskt Snus is made from 100% Thai tabacco.
One box costs about ฿250 ($ 8 / € 6) and depending on consumption reportedly it lasts for about 6 days or so. A wholesaler for the South is located in Chalong, Phuket.
The Southern provinces Phuket, Phang-Nga and Krabi appeal to many Scandinavian visitors and expats.
In other araes in Thailand the product can be mail-ordered by individuals as well.
For more information about Svenskt Snus, click here.

Note:
Monk is not alone, roughly at the same time, compatriot Karl started producing snus in Sihanoukville for the local market in Cambodia and there’s even a Swedish snus manufacterer in Vientiane, Laos too.