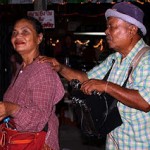 The poor woman with the blind singing husband

Now that the poor man with the elephant or the man with the poor elephant is more or less being banned from Thai streetviews, another profitable franchise concept has emerged.The poor woman with the blind singing husband.For those unaware: A woman with a collection cup is being followed by her blind husband holding her shoulder [...]

END_OF_DOCUMENT_TOKEN_TO_BE_REPLACED 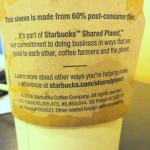 Seen at Starbucks:First you start a program for fair trade and fair sharing of resources called Shared Planet.Then you trademark it to prevent others to do the same. How fair is that?

END_OF_DOCUMENT_TOKEN_TO_BE_REPLACED 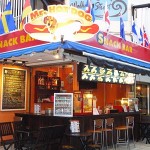 Compared to Phuket city and Patong, Ao Nang in Krabi is quite provincial. According to GeoNames it has a population of 8000, but wether this figure is correct or not it still managed to maintain a bit of a village atmosphere.Ao Nang sometimes reminds me of a miniature Patong; there’s a multitude of tourists of different [...]

END_OF_DOCUMENT_TOKEN_TO_BE_REPLACED

My boyfriend the sex tourist

The less one knows of a culture the harder it is not to stereo-type or be prejudice about relations between women of economically less developed countries and foreign men who are better off.The cliche image of Thailand is that single ladies are easy to get by practically any foreign man of a richer country, regardless [...]

END_OF_DOCUMENT_TOKEN_TO_BE_REPLACED

Seen on Thai MVtv channel: Not only do they show a ‘for screening purposes only movie’, which is illegal, but despite the fact that the movie is broadcasted in the original English version, MVtv or the company they bought/copied it from took the effort to subtitle it in English as well.Perhaps for the deaf and [...]

END_OF_DOCUMENT_TOKEN_TO_BE_REPLACED 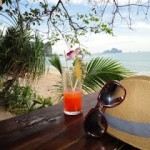 By I-nomad on September 9, 2011 | Leave a response
END_OF_DOCUMENT_TOKEN_TO_BE_REPLACED

Where the streets have no name II

When in Ao Nang, annother place of interest are the girly bars.They are all concentrated in one street which is a miniature sanitized version of Bangla Rd. in Patong or Walking street in Pattaya. Similar to bamboo bars and restaurants (street) it has no official name, because the land is privately owned. Instead it goes by [...]

END_OF_DOCUMENT_TOKEN_TO_BE_REPLACED 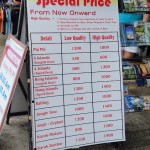 Seen in Airport Road, Ao Nang, Krabi:Fancy a low quality elephant ride?On the sign it says for high quality you get “Minimum of People less than limited of Boat”.Does that mean that if you choose the low quality boat trip options, they are about to capsize or you will not be paddling in your kayak [...]

END_OF_DOCUMENT_TOKEN_TO_BE_REPLACED 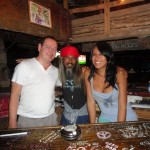 Where the streets have no name

Seen in Ao Nang, Krabi; Mr. Long bar and restaurant.The spot is a bit hard to find, since it’s situated on a dirt road, which has no official name and as far as I know is just being referred to as Soi Bamboo or just bamboo bars.The road which is a side street of Airport [...]