Similar to the clever use of the Thai typography for a washing powder called “Breeze”, which will read like USA or Usa for foreigners, I tried to come up with something similar, based on the characters u,s,a,n,w,o,b,v,i,l and y, which are about the only letters which have a more or less readable Latin script equivalent [...]

END_OF_DOCUMENT_TOKEN_TO_BE_REPLACED

Chuang Chuang fovourite pastime is eating, after becoming obese weighing 150 Kg/331 Pounds, his parter Lin Hui felt unconfortable mating with him any longer, so the zoo’s chief veterinarian put him on a strict diet of bamboo leaves 2 years ago.This video which I shot 4 days ago shows his eating habits haven’t changed much [...]

END_OF_DOCUMENT_TOKEN_TO_BE_REPLACED 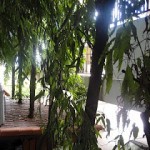 Seen in my hotel in Chiang Mai, three trees grow through a small shed

END_OF_DOCUMENT_TOKEN_TO_BE_REPLACED 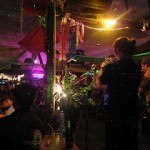 Hidden away on the North side behind Ratchawithi road is a small nightlife enclave with an interesting spot called Roots Rock Reggae. “Come to shake your little ass!!! And dance with us!!!” is their slogan. The place was 90% packed with foreigners, the rest being filled up with unconventionally dresses Thai. Not all visitors had [...]

END_OF_DOCUMENT_TOKEN_TO_BE_REPLACED 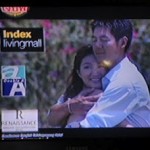 Seen in a Thai restaurant called “Juice” in Chiang Mai, behind the norh of Ratchawithi Road on the corner 50 M/160Ft opposite of Roots Rock Reggae bar. A lampshade made from a Leo beer carton box and it has an adjustable flap as well.This zero-investment policy paid off, since the most expensive item on the [...]